One Pill Makes You Smaller...

The main reason I quit my day job was to act more.  Yep.  I did that thing they all say not to do.  Well, those people just don't want the competition, IMHO (they are the ones that don't realize there's room at the top.  And the top is wherever you want it to be).  I have opened up my days for auditions and gigs and limited my nights of performance.  Kind of.  But this is good.  I feel it is promoting focus and discipline.  I’ve lived many years without either of those, so this may take a while.  But the proverbial ball has begun to roll.

The awesome thing is, I’ve had three auditions in the past month and a half.  It’s not a lot, but after being called for three things in the past year before, it’s a step in the right direction.

I also realized the other day that I have virtually no time to see my Mon-Fri 9-5 friends now.  It’s bittersweet.  I love those friends, some are my besties, but as a creative who has to create and an extrovert that wants to... extrovate?  Well, my louder, more obnoxious side is a bully.  And often shows up in my creative side’s output anyway. My free nights are taken currently by voiceover class or rehearsal.* So, I don’t have a lot of time for those friends now.  That’s the bitter. 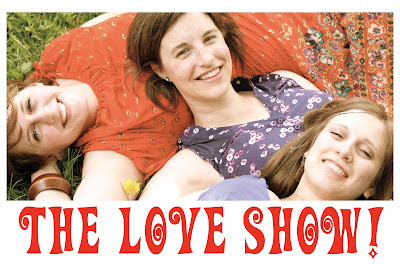 click the pic for all the lovey dovey wovey details.

The sweet is that I have time to see the other friends I have missed because of day job/night creativity.  And that there are less of those friends, so I have more creative time.  And I’m totally a daytime creative person; I can rehearse and perform at night, of course, but writing and crafting happen with sun.  I love my friends, but my soul fuel contains a slightly greater percentage of making art.  Luckily, I get both consistently. Not as frequently as I should, but leisure time is a close third anyway.

So here’s the gross part (but possibly "scandalous" confessional part):  I am infinitely happier.  A light has switched on inside. The me of yore that loved life and performing and writing and sharing has ceased scratching at the surface and is now poking her beak through the egg.  This is in no small part related to my change in money-making strategy.  I know making the job transition was integral to this, pun intended, bitch-flip.

But another big part of it?

Keep it short or get your own blog.

Crap I Talk About

If you think *this* is boring, you should check out *these* guys!

Live In The Now

Wait, didn't Courts say something about...