My Feelings Can Again Be Best Summed Up In An Obscure Pop Song...

It's been a while.  I always say that I'm not going to mention that I haven't written in a while, but I always mention it.  But I know all y'all have me in your fancy RSS Reader or whatever, so getting an entry from me is like a little surprise gift, isn't it?  ISN'T IT.

And now I'm going to make that oft-repeated blogger promise that I'm going to be blogging much more  now because I don't have a job where I *have* to be in front of a computer, hence whenever I'm in front of a computer now it's because I want to be.  But this promise can never be made because the proof will be in that puddin'.  That deliciously metal internet puddin'.  And in writing.

So, whatever.  We'll see when the next time is that I decide to update you on the lush life I'm leading as a performer/writer/whatever the fuck I want to do... and, a waitress. 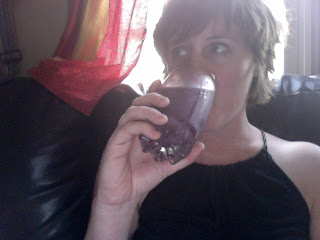 (and drinking a fucking smoothie I made.)

Yes!  I am waiting tables again.  As a young lady who is going to be a whopping 35 years old in three weeks (a good 13 years older than the average age of a server I'm sure), my current day (night) job is shlepping Dutch-inspired bar food, strong gin cocktails, and fancy beers to the 21+ crowd in downtown St. Paul at a huge establishment called Amsterdam Bar & Hall.  By the by, you gotta read the high energy blog by my new Facebook buddy and co-worker, Brenda.

I made the decision to quit my day job for many, many reasons.  One was that I was sick of sitting down for 8 hours a day.  I am a naturally energetic person (REALLY) and I felt that the four and a half years I had spent on my ass for half my life during that time had worn me down to the point that I had lost the Courtney of days of old.  Did I mention I'm pretty much middle-aged now?  Heh.  But seriously, my soul had been sucked out.  This wasn't because of my co-workers, who I had grown to love like family, or my boss, who is arguably one of the most supportive bosses I've ever had, most of the time.  It was just... being in front of a computer all day.  My interactions with nature have been much more frequent in the past two weeks since leaving that job.

So anyway, I needed to be up and about.  I needed to be exercising, but the two days of yoga a week I was barely committing to wasn't cutting it.  I've put on about 20 pounds since moving to the land of cheese curds and meat raffles.  And I've lost 7 in the month and a half on my feet, running around in a very large amount of square-footage for 8+ hours, 4-5 days a week.  Of course, the best fries in the Twin Cities are the one step back for my two steps forward, but they're SO "DAM" GOOD.  (See what I did there?)  Anyway, it's working.

Keep it short or get your own blog.

Crap I Talk About

If you think *this* is boring, you should check out *these* guys!

Live In The Now

Wait, didn't Courts say something about...